Utilize as many sustainable and innovative materials as possible.

SAOLA was born with a clear goal: to offer cool, comfortable, and above all, innovative and sustainable products to change the shoe industry, one of the most polluting in the world.

From the start, we knew we could not change or revolutionize everything at once, so we made choices.

After months of research, visiting factories and suppliers, we decided to focus the first phase of our revolution on what makes the biggest impact. Around 60% – 70% of the carbon footprint of shoes comes from materials and manufacturing.

We use recycled, bio-sourced materials and innovative technologies.

“Offer cool, comfortable, and above all, innovative and sustainable products.” THE IMPACT OF A SHOE:

Our first goal was to find a factory in line with our social and environmental values, one that was also close to our raw material suppliers.

Since 2019, we have worked with a factory near Hanoi in Vietnam. This factory also produces products for a few major brands that have social and environmental rules in place.

This allows us to guarantee favorable working conditions for the employees, and also guarantees the quality of the products.

Xavier, who has been based in Taiwan for many years, is in charge of product development and production monitoring.

He visits our factory in Hanoi to provide feedback on the quality of the factory, the working environment, and the improvement in production quality, evident season after season.

While the world is constantly changing, we promise to be in constant search to find better solutions for the social and environmental aspects of SAOLA.

We want you to be proud of your SAOLA SHOES. 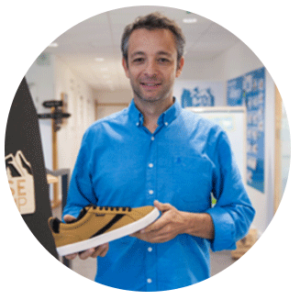 “I would like to set out some facts to explain to you the vision of SAOLA.

As a young brand (we have just celebrated our 2nd anniversary), we are aware that there are many points on which we still have to work … it would not be funny otherwise! And this is what we are working hard on season after season.

In addition to France, we sell in the United States (our largest market), Canada, Germany, Israel, the Philippines and New Zealand. So yes, we are obliged to transport the goods. By wanting to sell in different countries, it is difficult to find an ideal production site (because we can only have one at this stage because of our small size but it would be a dream to get there in the coming years!).

In addition I would like to draw your attention to the “made in” because many brands can produce in Europe but with materials that come from fairly distant countries too, and according to regulations, the% of non-European materials on products ” made in Europe “can be very high. We have seen it in many factories in Portugal among others. Do not hesitate to challenge them.

I spent a lot of time analyzing studies done on the carbon footprint of a pair of shoes and it appears that a large majority of this carbon footprint (70% or more) is linked to the materials and production process. . Maritime transport Asia Europe represents between 3% and 6%. Note that some studies show that a truck from eastern countries in France for example will pollute more than a boat with thousands of containers from Asia …

Due to the targeted international distribution, we made the decision to tackle 70% first before tackling other subjects, because we cannot solve everything all at once. But believe us, our brains are running non-stop, always with improvement and optimization for the planet in mind.

Thank you for taking the time to read this long message, hoping that it will give you some additional elements for your reflection.

All shoes on Saola.co.nz are stocked and shipped from our Christchurch warehouse to all over New Zealand & Australia.  For other countries please visit: www.saolashoes.com